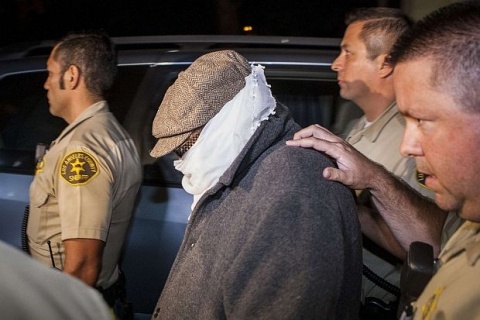 Nakoula Basseley Nakoula, 55, the man behind the film that enraged the Muslim world is being held without bond for breaching probation terms. Photo by EPA/ BGNES

The man linked to the US-made film offensively depicting Islam's Prophet Muhammad which triggered unrest across the Middle East, is been held without bond after a hearing in Los Angeles, California.

BBC reports the judge grounded his decision on Nakoula Basseley Nakoula, 55, being a flight risk with a lasting pattern of deception.

Nakoula went by many names, and was sent to 21 months in federal prison for bank fraud and using false identity. The man opened numerous bank accounts with fake names and stolen social security numbers. He then deposited bogus checks into the new accounts and withdrew money before the checks bounced.

Nakoula was investigated for violating probation terms after he was released from prison in 2011 for bank fraud and has not been detained over the contents of the inflammatory video.

Under the terms of his probation, he was banned from using computers or accessing the internet for five years without an officer's permission.

Nakoula, a Christian Copt, is believed to be the person who uploaded the trailer of the film on YouTube and even its author. After being identified by the media, he has asked for police protection and had been in hiding since the release of the video. He strongly denies he is "Sam Bacile," the director and writer of the movie and explains that only the similarity in the names has led to him.

Meanwhile, the actors hired to perform in "The Innocence of Muslims" say they had no idea the movie would be offensive to Muslims.

The low-budget film, titled "The Innocence of Muslims" portrays Prophet Muhammad as a religious cheat and a womanizer. It depicts an imaginary attack of Muslims on a Christian family. The film also contains hints of pedophilia and homosexuality.

Any portrayal of the Prophet is considered blasphemous to Muslims. The Middle East protests flared only after the trailer was aired in Arabic.

On September 11, an attack on the US consulate in Benghazi, said to be triggered by the film, killed Ambassador Christopher Stevens, 3 other officers, and several Libyans. Stevens is believed to have died from smoke inhalation.

Earlier, the Obama administration had requested Google, the company that owns YouTube, to remove the clip. The technology giant refused, saying the film did not breach its rules.

The clip has not broken any laws in the US, where freedom of speech is enshrined in the constitution's first amendment.