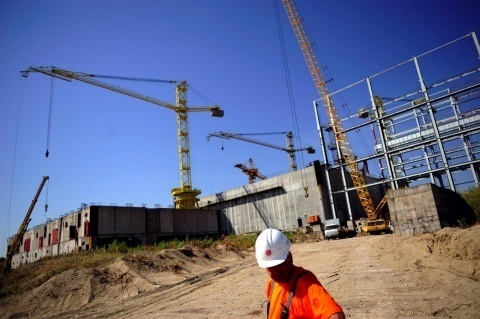 After it was first started in the 1980s, the construction of Bulgaria's second NPP at Belene on the Danube was stopped in the early 1990s over lack of money and environmental protests. File photo

The American investment fund Quantum Group is going to finance the project to build a second Nuclear Power Plant in Bulgaria's Danube town of Belene.

The statement was made by Bogomil Manchev, owner of the Risk Engineering" company and consultant for the alleged US investors for the project, speaking in an interview for 24 Chassa (24 Hours) daily.

According to Manchev, the investors will provide the so-called own capital of EUR 2 B, while the estimated remaining EUR 8 B, which include the debts of the National Electric Company, NEK, will come from other investors.

The businessman is firm he was the one to attract the Americans, with whom he had joint projects all over the world, such as "Risk Engineering" being a subcontractor for a Quantum Group Middle East job.

Meanwhile, Trud (Labor) daily writes that the NPP Belene candidate is quite murky, while Ancho Badev, representative of Bulgaria in the Quantum Group consortium, is a failed candidate to privatize the pharmaceutical company Sopharma and the Varna ship yard, and Samuel Reddy, who arrived in the Parliament as a spokesperson for the Consortium, is known in international energy circles as a "participant in lost causes."

"Global Power Consortium had to be registered in the US "offshore" State of Delaware without any listed assets because the government required a federal registration," Manchev, quoted by Trud, says, adding the Cabinet had known for a while about the US company's intentions, despite the fact they were officially announced just days ago.

The US Embassy in Sofia issued an official statement stressing the American government is not a side in any discussions about a possible interest of US companies in the Belene project.