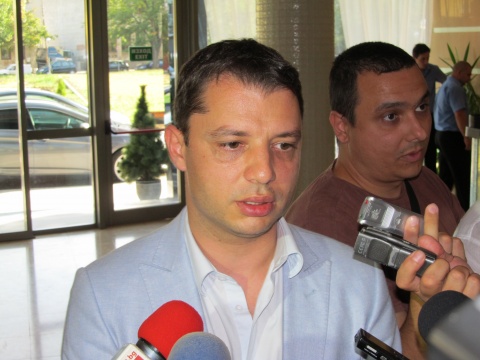 Delyan Dobrev, Minister of Economy, Energy, and Tourism, has said that it is too early to talk about restarting the terminated Belene NPP project.

On Wednesday, a largely unknown US enterprise called "Global Power Consortium" expressed interest in actually building Bulgaria's Belene NPP, the project for a second Bulgarian nuclear plant that was abandoned by the Borisov Cabinet in March 2012.

The interest of the largely unknown US enterprise Global Power Consortium in the construction of the 2000 MW Belene was made public in Sofia by a representative of the entity, Samuel Reddy, who said he had presented an offer to Delyan Dobrev.

"This investor, who presented himself to MPs, is yet to submit his project. It is not about starting the project anew," Dobrev stated in a Thursday interview for the morning broadcast of private TV station bTV.

Bulgaria's Energy and Economy Minister suggested that all negatives would have to be cleared before the project could start again.

"It is not clear whether the investor will agree to our conditions. Global Power Consortium has so far voiced preliminary consent with the conditions placed by the Bulgarian state," Dobrev added.

He suggested, however, that the details were still unclear and the small print had to be examined before the question of signing a contract was brought up.

Dobrev explained that the fact that Global Power Consortium was not a popular name was absolutely normal, adding that such tie-ins were usually formed around specific projects.

Bulgaria's Energy Minister said that if the Bulgarian government encountered serious and reliable partners who agreed to the conditions and were ready to shoulder the responsibility to complete the Belene NPP project, the Cabinet would certainly be interested in continuing the talks.

"Bulgaria must not offer state guarantees for the project and all expenses on Belene NPP until now must be recovered. An agreement must be reached on arbitrage payments, which are to be covered by the investor," Dobrev emphasized.

He noted that the previous concept involving state participation had not worker out following a three-year search for an investor.

Dobrev attributed the recent expression of investor interest in Belene NPP to the fact that the concept had been changed.

The next day the Bulgarian company said it was ready to strike back with a EUR 61 M counter claim against Atomstroyexport over delayed payments for purchases of old equipment for the plant, worth about EUR 300 M.

Atomstroyexport, a unit of Rosatom, said it had increased its claim at the International Court of Arbitration in Paris to cover construction work and production costs of the two canceled nuclear reactors.