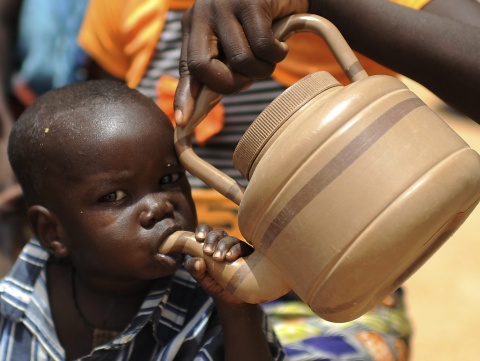 An image made available 10 July 2012 showing a child drinking from a canister at a feeding center, in Dingazi in Quallam, Niger, Sahel, 30 June 2012. EPA/VBGNES

Bulgaria's Cabinet has approved the allocation BGN 100 000 in humanitarian aid for the refugees from the civil war in Syria, and the victims of famine in Africa's Sahel region.

The humanitarian aid was approved Wednesday at the request of Bulgarian Foreign Minister Nikolay Mladenov.

Of the total sum, BGN 30 000 will go to refugee relief efforts for the conflict in Syria, which has been raging for more than 18 months and has claimed more than 29 000 lives.

"So far all attempts to end the violence have been unsuccessful. Organizations such as the UN and the Red Cross are doing everything possible to take care of the dozens injured in the war every day. In parallel, the conflict has meant that neighbouring countries have been overwhelmed by a huge refugee wave. The humanitarian situation in Syria itself is no better. The lack of essential goods is more acute and this has compromised the lives of people there, many of whom cannot escape because they are trapped," Bulgaria's Foreign Ministry declared in a statement.

It said that as part of a coordinated effort to help the destitute population, Bulgaria will donate BGN 30 000 to the Office of the United Nations for the Coordination of Humanitarian Affairs (UNOCHA).

Another part of the approved funding will go to the Sahel. This region of Africa, including Senegal, Mauritania, Mali, Burkina Faso, Niger and Chad, is affected by a chronic food crisis, the Bulgarian Foreign Ministry stressed, adding that according to the EC, famine in the Sahel threatens 18 million people, with nearly eight million of them being unable cope without help.

It reminded that overcoming famine in the Sahel is a priority for the Bulgarian EU Commissioner who is in charge of International Co-operation, Humanitarian Aid and Crisis Response, Kristalina Georgieva.

"One of the largest camps of Palestinian refugees is in Syria. The worsening situation in the country with regard to access to food and basic necessities impacts most strongly on people in the refugee camps. According to the agency, a total of 225 000 Palestinian refugees alone are affected by the conflict in Syria. With the funds provided by the Bulgarian government, UNRWA can assist programs in support of education for Palestinian refugees. The agency effectively supports the largest network of primary schools in the Middle East. In addition, UNRWA cares for the health of children in the refugee camps as well as delivering food and medicine," the Bulgarian Foreign Ministry elaborated.

The institution further noted that Bulgaria periodically provides humanitarian assistance in response to disasters and other crises that require rapid response to save lives or provide relief to victims.

In 2010, for example, such assistance was provided to Haiti. Grants were also secured for Pakistan, Chile, Ukraine and Moldova.

In 2012, Bulgaria responded to an appeal from UNESCO, and with funds from its special Trust Fund, financed a project organized to maintain the educational level of children of Syrian refugees in Jordan.