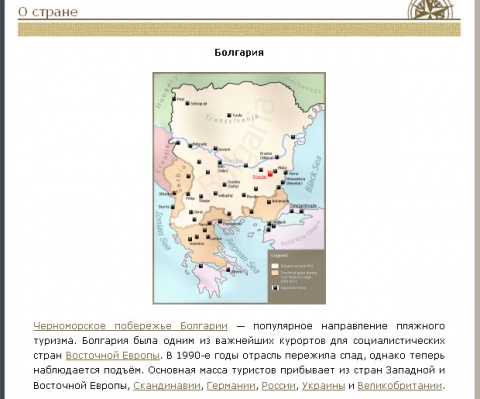 The Uzbekistan tourist firm's site lists information on tourism in Bulgaria with a map of the First Bulgarian Empire about 1000 years ago.

A tourist firm from Uzbekistan has mistakenly attached a map of the First Bulgarian Empire to an article advertising tours in Bulgaria.

The Uzbekistan firm named Premium Business Travel is based in the Central Asian country's capital Tashkent.

Apparently, it offers trips to Bulgaria with little knowledge of its contemporary history and geography, state Bulgarian social media users who have been quick to mock it.

The map, which is correct historically but not with respect to the present age, lists Bulgaria's neighbors as Byzantium, Serbia, Croatia, and the Pechenegs, and its capital as Veliki Preslav (capital in 893-971 AD).

The map's legend does note that it portrays Bulgaria in the 9th-10th century but the inscription is very small. In addition, out of all of its destinations, the firm in Uzbekistan has presented only Bulgaria with a historic map, which is evidence it was used by mistakes, and has deservedly caused hearty laughs for Bulgarian social media users.

Uzbekistan still has no embassy in Bulgaria even though it is supposed to have one under an agreement between the two countries signed in 2004.

Bulgaria, however, does have an embassy in Uzbekistan's capital Tashkent, a city which is the home an ethnic Bulgarian community of more than 2 000 people.

In 2012, Bulgaria saw a major increase in the number of tourists from other former Soviet Republics such as Russia, Ukraine, Belarus, Moldova, and Kazakhstan.