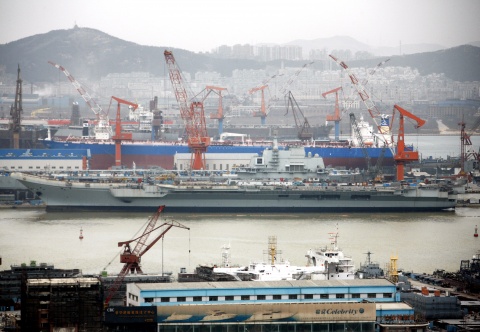 A picture made available on 12 April 2011 shows its first aircraft carrier under construction at a shipyard in Dalian, Liaoning province, 10 April 2011. by EPA/BGNES

The official ceremony was held on Sunday at the Dalian shipyard in Northeast China, where the aircraft carrier has been docked for refitting since 2002, local media reported on Monday as cited by RIA Novosti.

During the ceremony, China's national flag, the People's Liberation Army flag, and the Chinese navy's colors were raised over the ship, currently known as Number 16.

The Admiral Kuznetsov class Varyag aircraft carrier was 70% complete when China bought it from Ukraine for USD 20 M in 1998.

Before being sold, the ship was disarmed and its engines were removed.

China launched a complete overhaul of the ship in 2002, also developing carrier-based aircraft. Beijing has repeatedly insisted the carrier poses no threat to its neighbors and that it will primarily be used for training and research.

There has been speculation in the Chinese media that the aircraft carrier could be named Diaoyudao after the Chinese name for the disputed islands controlled by Japan in the East China Sea.

The long-running territorial dispute between Beijing and Tokyo escalated in August, after Japan formally announced its decision to buy three of the five disputed islands, called Senkaku in Japan, from the Kurihara family for JPY 2.05 B (USD 26.1 M).

The islands, which are also claimed by Taiwan, lie on a vital shipping route and are situated above large hydrocarbon deposits.