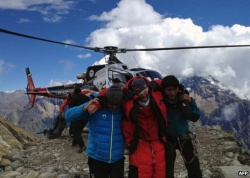 Injured climbers were flown to safety by helicopter.

At least nine climbers are feared dead and six more are missing in Nepal after an avalanche swept away Europeans and others on a Himalayan peak, BBC reported.

Officials confirmed two bodies had been recovered while a further seven were spotted on the slopes of Mount Manaslu in the north of the country.

The avalanche struck a base camp near the summit on Saturday, police said.

The two bodies recovered are said to be of a German and a Nepalese guide.

Police official Basanta Bahadur Kuwar was quoted as saying by the Associated Press news agency that 10 people had survived the avalanche but many among them were injured.

They were being flown to hospitals by rescue helicopters, he added.

Officials are trying to determine exactly how many people were in the climbing party.

Hundreds of foreign climbers head every year for the Himalayas in Nepal, which has eight of the world's 14 highest mountains, including Mount Everest.