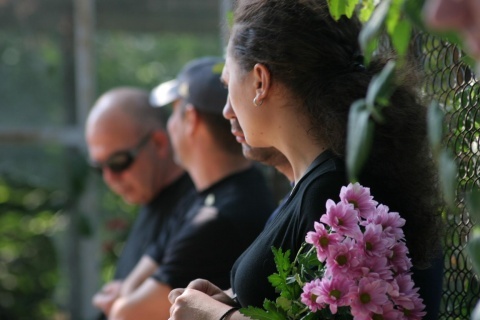 One year after the violent protests subsided, the village of Katunitsa, near the town of Plovdiv, is again buried in grief over the death of the two young men. Photo by BGNES

The father of the 19-year old teenager, who was struck and killed by a mini-bus driver linked to a controversial local Roma leader, believes that one year later justice has not been done.

"I want to thank all of Bulgaria for the support that I feel. I regret that my son had to die to make us aware of how bad things are. Still the real murderer is not behind bars," Atanas Petrov, father of the murdered Angel, told bTV channel in an emotional interview.

He spoke as the people from the village of Katunitsa, near the second biggest city of Plovdiv, marked the first anniversary of the tragic events that led to the deaths of two teens.

A year later, Angel's friends and his relatives said they never forgive and forget as they are convinced that was contract murder, whose masterminds are out of jail.

Ten years of smoldering tensions between Kiril Rashkov, an affluent self-proclaimed Roma "tsar", and the residents of the village of Katunitsa, escalated a year ago into riots, cutting short the lives of two young Bulgarians. Their murder stirred sheer outrage in social networks and a wave of rallies across the country.

In August this year the Plovdiv Court of Appeals sentenced Simeon Yosifov, 55, who was behind the wheel of the car that ran over and killed 19-year-old Angel Petrov, to 18 years of imprisonment.