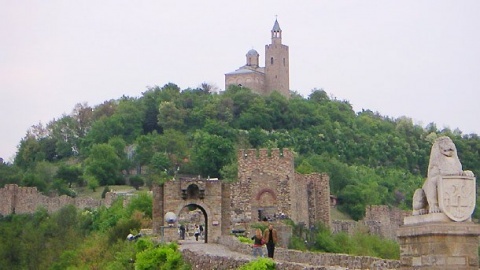 Following the tradition, the festivities started with a solemn mass held at the historical Sveti 40 Machenitsi (Saints 40 Martyrs) church in the presence of many officials and quests.

"Our predecessors were wise and dignified people. It wasn't by accident they selected this church and the Tsarevets fortress to declare our Independence. These historical sites became the stage of the event prepared for many years by several generations of Bulgarian heroes fighting for freedom; these sites are the culmination of the process of establishing the Third Bulgarian State," said Veliko Tarnovo Mayor, Daniel Panov.

The Veliko Tarnovo Bishop Grigoriy blessed the battle flag of the National Military University "Vasil Levski" and another 35 flags of State and municipal institutions, non-governmental organizations (NGOs) and educational institutions.

The national colors were hoisted at "Tsarevets." After that servicemen laid flowers and wreaths at the Independence Pyramid.

In the afternoon, there will be a procession from "Tsarevets" to the "Mother Bulgaria" monument, where participants will lay a garland with Bulgaria's national colors.

The solemn military roll call and fireworks will start at 7:30 pm on "Tsar Ivan Assen II" square. The keynote address will be delivered by the Speaker of the Parliament, Tsetska Tsacheva.