VP Urges Bulgarians in Ukraine to Be More Involved with Bulgaria 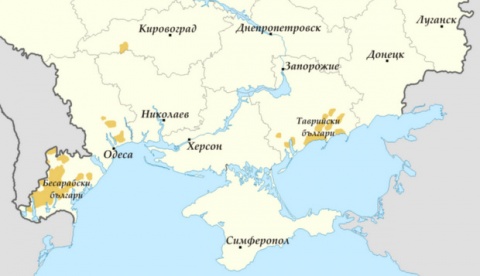 The ethnic Bulgarian communities in today's Ukraine. The Bessarabia Bulgarians live in Southwestern Ukraine, while the Taurica Bulgarians who moved from the region of Bessarabia in 1861-62 populate parts of south-central Ukraine. Map from Wikipedia

The historic ethnic Bulgarian community in Ukraine is a "constructive" part of Bulgaria, and must play a greater role in Bulgarian society, according to Vice President Margarita Popova.

Ukraine is home to a large ethnic Bulgarian minority descended from Bulgarians from Bulgaria proper who fled the atrocities in the Ottoman Turkish Empire in the 19th century. These Bulgarians settled in the Bessarabia region of the then Russian Empire that it conquered after the War of 1806-1812. The Bessarabia region today is located in both Southwestern Ukraine and in Southern Moldova, which also has a sizable ethnic Bulgarian community.

In 1861-1862, many ethnic Bulgarians from the Bessarabia region moved to the Taurica region in what is today's central southern Ukraine, north of the Crimea.

Between 2002 and 2011, Bulgaria granted citizenship to almost 19 000 ethnic Bulgarians from Moldova, and almost as many from Ukraine.

In her talks with the local authorities in the Ukrainian city of Zaporozhia (Zaporozhye in Russian), Bulgarian Vice President Margarita Popova assessed positively the opportunities for social mobility that ethnic Bulgarians have in Ukraine, the press service of the Bulgarian Presidency reported.

Popova has also recognized that ethnic Bulgarians in Ukraine are able to preserve their national identity, traditions, and culture.

In her message to the Ukrainian authorities, Bulgaria's VP offered to share the Bulgarian experience with EU integration.

"As a VP, I would like to assure you that the European road is the right one, and that it has no alternative on the road to democracy," Popova declared in Zaporozhye.

Oleksandr Peklushenko, the Governor of the Zaporozhia Oblast (District), has expressed gratitude to Bulgaria for supporting the education of the Bulgarian community.

The Bulgarian Presidency points out that Bulgaria's government sends teachers of Bulgarian language and culture to local schools in the Zaporozhia Oblast, which has one of the largest Bulgarian communities outside of Bulgaria, and also provides spots for ethnic Bulgarian students from Ukraine in Bulgarian universities.

On Friday, the delegation of Bulgarian VP Margarita Popova laid flowers at what is believed to be the grave of Khan Asparuh, the founder of the First Bulgarian Empire in 681 AD. Her delegation is set to visit the Bulgarian-populated villages of Botevo and Strogonovka.

On September 22, 2012, in the village of Kolarovka, near the city of Prymorsk, Zaporozhia Oblast, Popova will open a memorial on the occasion of the 150th anniversary since the settlement of ethnic Bulgarians in the Taurica region.

She will be a guest of honor at the Fair of Taurica Bulgarians and will visit the Ukrainian-Bulgarian high school in the city of Prymorsk.