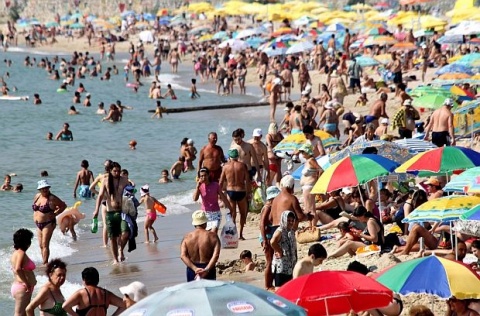 According to Bulgaria’s Deputy Minister of Tourism, Ivo Marinov, Bulgaria registered a 34% year on year increase in Russian tourists in the period January - September 19, 2012. Photo by dariknews.bg

Alexander Radkov, Chairman of the Russian Federal Tourism Agency and Ivo Marinov, Bulgaria's Deputy Minister of Economy, Energy and Tourism announced Friday that there had been a 34% year on year increase in the number of Russian tourists to Bulgaria for the period January 1 – September 19, 2012.

Marinov and Radkov met within the Otdykh/Leisure-2012 International Specialized Trade Fair for Tourism and Travel taking place on September 19-22 at the IEC Krokus Expo in Moscow, according to a media statement of Bulgaria's Ministry of Economy, Energy and Tourism.

The two commented on the strong results achieved in the summer season of 2012 and on the good bilateral relations in the sphere of tourism.

Marinov and Radkov also talked about the preparation for the forthcoming winter season and summer season 2013.

Bulgaria's Deputy Minister of Tourism also met with Maya Lomidze, Executive Director of the Association of Tour Operators of Russia (ATOR) and with representatives of the local tourism industry.

A work meeting was organized to set down the criteria for accommodation sites for holiday camps of Russian children.

The conditions are to guarantee safe and fruitful holidays for the children.

Ivo Marinov and Boyko Kotsev, Bulgaria's Ambassador to Moscow, awarded certificates to the ten Russian tour operators who sent the most tourists on holiday to Bulgaria.

In the course of the expo, Bulgaria's Ministry of Economy, Energy and Tourism held yet another attestation of international tour operators, setting the topic as "Bulgaria – A Country of Health".

Representatives of 40 Russian tour operators took tests and responded to questions regarding Bulgaria's opportunities as a destination for SPA and medical tourism.

The top 13 achievers were awarded certificates and the top three received 4-day holiday vouchers for two at a SPA hotel in Bulgaria.