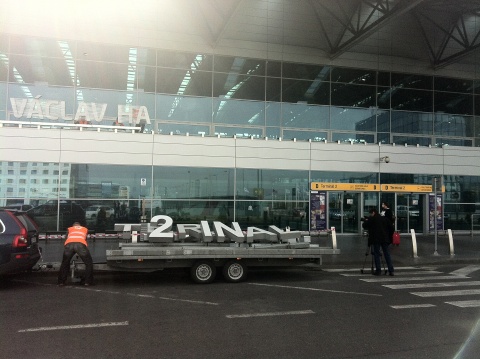 The sign with Vaclav Havel's name has been installed at Prague International Airport, marking its official renaming after the emblematic Czech politician, while the old sign was taken down. The historic moment was captured in this unique photo by Novinite

The international airport in the capital of the Czech Republic has formally been named after Czech dissident, author, and former President Vaclav Havel, as the sign with Havel's name was installed on Friday.

A Novinite.com (Sofia News Agency) journalist captured the historic moment of the renaming of the Prague Airport in a unique photo (above).

A famous Czech playwright and intellectual, one of the authors of "Charter 77", he was jailed three times for opposition activity during the communist period. He is a co-founder of the Civic Forum association after the "Velvet Revolution" at the end of 1989.

"Vaclav Havel deserves to be honored in a way that would not only be a formal recognition of his achievements, but also a reflection of his struggle for our freedom... Thus far, the name "Prague Airport" evokes memories of the widely known Ruzyne prison. Renaming it "Vaclav Havel Airport" shows our declaration to uphold values which we admire," stated Czech director and producer Fero Fenic, in December 2011, in petitioning the Czech government to change the name of the airport.

"Many other countries have renamed airports in major cities for people who greatly influenced their history such as John F. Kennedy Airport in New York or Charles de Gaulle Airport in Paris. We believe that in this way, Vaclav Havel would also be perceived not only as a sign of his heritage, but also as a reminder that we need to protect our freedom and democracy every day," he added.

The authorities of the Czech Republic took the decision to rename Prague Airport Ruzyne into Prague Airport Vaclav Havel in March 2012, after considering the idea for three months.

Meanwhile, in a similar development in Bulgaria, in mid-2012, a group of Bulgarian experts proposed an initiative to rename Sofia International Airport "Vrazhdebna" after US inventor of Bulgarian origin John Atanasoff, who known as the father of the modern-day computer.