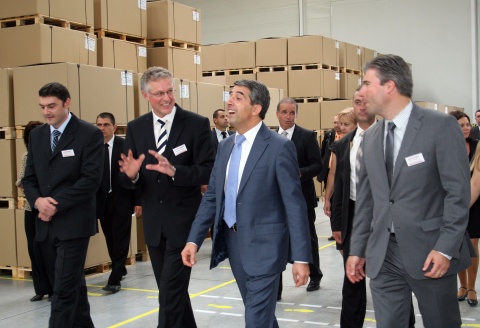 Bulgaria's second-largest city Plovdiv ought to become the country's main hub for food production, according to President Rosen Plevneliev.

"Plovdiv can and must become the center of the food industry in Bulgaria," stated Plevneliev during a visit to the city Thrusday.

Bulgaria's President was welcomed by Plovdiv mayor Ivan Totev, and both took part in an opening ceremony for a new plant for home appliances parts in the Kuklen Industrial zone, build by German company Sieger Mecalit.

In the context of reaffirming his commitment to work for the boosting of foreign investments and industrial production in Bulgaria, Plevneliev mused about the country's potential for food production.

"Bulgaria produces and exports chiefly raw agricultural produce. That can change, and our country must aim at building more production capacities in the food sector," said he.

"This will also lead to a lowering of food prices nationwide," added Bulgaria's President.

Plevneliev failed to name specific sources of investments to that end, saying building of new capacities will be done with the help of 2014-20 EU Funds.

Moreover, he did not point out how the Bulgarian state will go about addressing the chronic structural problems of Bulgaria's agriculture.