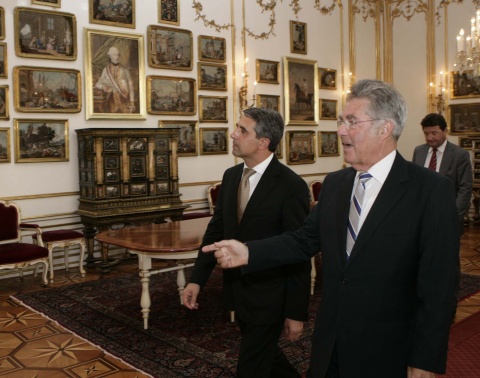 Bulgarian President, Rosen Plevneliev, who is on a two-day official visit to Austria, opened Tuesday in Vienna the Bulgarian-Austrian business forum.

The forum includes over 450 representatives of the business from the two countries.

The first deal was sealed between the Bulgarian company Technology of Metals and Austrian Havle. In the next 5 years the Bulgarian firm will export to Austria plumbing and sewage parts for over EUR 30 M.

The management of Havle pointed out that the Bulgarian company was among their top three partners.

Speaking in German, Plevneliev invited all Austrian participants to invest in Bulgaria, highlighting a number of economic reasons to do so. He stressed that it was very rare at such forums to attract concrete deals as the one mentioned above.

He reminded of forthcoming investments of Austrian power utility EVN in their joint Gorna Arda hydro project with the National Electric Company, NEK, for EUR 400 M, and the participation of Austrian energy giant OMV in the exploration of natural gas deposits in Bulgarian Black Sea waters. According to him, Bulgaria will also use Austrian experience in the creation of its own toll road system.

Dr. Christoph Leitl, President of the Austrian Federal Economic Chamber, cited by the Bulgarian Standard daily, noted that the unemployment rate in Bulgaria was 8%, compared to an average of 25% in Europe, adding Austria plans to invest in Bulgaria long-term, and not just to make quick profits.

The sectors of tourism, energy, infrastructure and environment were outlined by Leitl as top partnership priorities.

The Chairman of the Bulgarian Chamber of Commerce and Industry, Tsvetan Simeonov, also cited by Standard, stated Bulgarian opposes common tax legislation for the entire EU because it would be a hurdle for the competitiveness of companies.