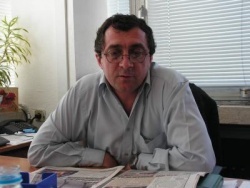 A member of the Bulgarian parliament may be involved in the brutal beating over the former general director of the country's sole nuclear power plant Kozloduy nearly a year ago.

"There are indications that an MP with vested interests stands behind the attack," the nuclear plant current director Valentin Nikolov said in an interview for TV 7 on Monday.

He declined to disclose the name of the politician or confirm Socialist former energy minister Rumen Ovcharov is among the suspects.

Nikolov added that police is investigating two more versions, implicating a fired accountant and rivals on the market.

Two unidentified assaulters attacked Alexander Nikolov while he was on his way home and brutally beat him on the head, tearing off part of his right ear.

The assault came just two months after the Bulgarian Energy Holding (BEH) appointed Alexander Nikolov CEO of the Kozloduy plant. Before that he was a Board member.

Half a year after the assault, Alexander Nikolov was unexpectedly fired and Deputy Economy Minister Valentin Nikolov was appointed in charge of the country's only operational nuclear power plant in Kozloduy in a surprising government move.

In April 2008 an energy boss whose company was in charge of maintenance of the Kozloduy reactors was killed in Sofia, fueling suspicions that links between the mafia and the political system run deep in the energy sector.

Kozloduy is the only nuclear power plant in Bulgaria and the largest electricity producer in the country, providing more than one third of the national electricity output annually.

The company has been operating since 1974 and employs about 4200 people. The company is entirely state-owned and a subsidiary of the Bulgarian Energy Holding.

It has raised safety concerns, and the country agreed to shut four of its reactors as a condition of joining the European Union.

Under that treaty, Kozloduy was to be decommissioned by 2009, but the work was not completed on time. Bulgaria therefore asked that the EU funding be extended until 2013, to allow it to be completed safely.

The European Commission has allotted an extra EUR 500 M in EU financial support is provided for decommissioning the Soviet-era nuclear reactors in Bulgaria, Slovakia and Lithuania.