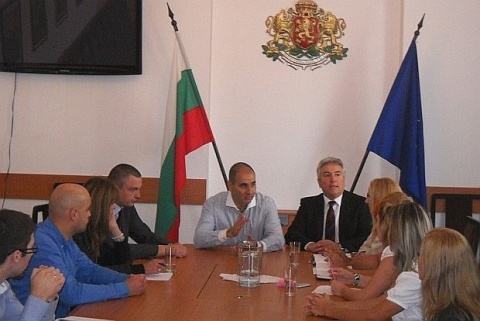 Interior Minister, Tsvetan Tsvetanov (center-left), met in the Black Sea city of Varna with relatives of the crew who were arrested in August during a raid of cocaine-loaded Saint Nikolay ship. Photo by DarikNews

The jailed in Spain Bulgarian sailors, who would be proven innocent, will be set free, Bulgarian Deputy Prime Minister and Interior Minister, Tsvetan Tsvetanov, promised the families Sunday.

Tsvetanov met in the Black Sea city of Varna with relatives of the crew who were arrested in August during a raid of cocaine-loaded Saint Nikolay ship. He explained that everyone is innocent until proven guilty, stressing law enforcement in Bulgaria, Spain, Great Britain, and the US are doing everything possible to establish and apprehend those who have been the masterminds of the crime.

The Minister told reporters that the talk revolved around what was most important for the families – the developments in the probe and the possibility for some of the detainees to be set free.

"I informed them about my trip to Spain in connection with the case, and shared every detail that is not classified," said he.

The relatives pointed out they were encouraged a great deal by the meeting over receiving answers to their questions, assistance, and assurance that there would be good news within two months for some of the sailors.

Tsvetanov explained the sailors currently have three State-appointed Spanish attorneys and the families have the right to hire their own defense councils. Some of the relatives confirmed their intention to do so.

On August 13, Spanish authorities nabbed 31 people, including 21 Bulgarians, after seizing 3 tons of cocaine brought from South America on a ship caught off the southern coast.

The ship is owned by the Burgas-based company Seaborne Trade.

The operation codenamed Cartel has been carried out jointly by GDBOP, the French police, the US DEA and the UK COKA.

It was also reported that the ship, sailing under Bulgarian flag, has been intercepted and traced for two days and two nights by an ATR-42 aircraft of the Italian Finance Police.

On August 23, Tsvetanov went to Spain especially for the cocaine ship affair together with Commissar Stanimir Florov, head of the Bulgarian anti-mafia unit GDBOP, where they met with Spain's Interior Minister Jorge Fernandez.

It emerged after the meeting that the sailors will be tried in Spain.