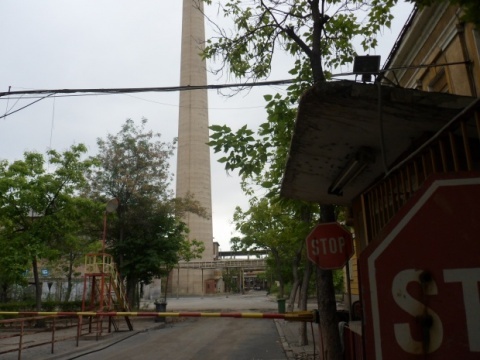 Bulgaria's largest non-ferrous metal plant had to be listed for piece by piece sale after a total management collapse. Photo by BGNES

The assets of Bulgaria's bankrupt largest non-ferrous metal producer, the Lead and Zinc Complex (LZC, OTZK) in Kardzhali were sold Friday to the company Harmony 2012 Ltd.

The sale concluded in just minutes, without any bidding and auction. The buyer was announced by the private law enforcer from the southern city of Kardzhali, Rosen Sirakov.

The envelopes with the offers were opened at 9 am Friday, and it emerged that the bidders were actually three, not two as previously announced.

The deadline expired at 5 pm Thursday. According to bTV, by 1 pm there has not been even one single offer, but two were filed at the last moment.

The assets for sale, covering an area of 326 230 sq.m., have an initial price of BGN 8.3 M. The sale has been organized on the request of one of the three largest lenders, the Bulgarian First Investment Bank, FIB.

Two of the bidders have deposited the mandatory fee of BGN 830 000. The third candidate was FIB, which as a lender was exempt from the deposit.

The total debt of the plant is estimated at BGN 350 M, meaning the price is 35 times lower. The investor is purchasing only the buildings and the land. The machines have a new owner already.

The tender was launched on August 13 with a month-long deadline, after a private law enforcer listed for sale 50% of severely financially troubled largest non-ferrous metal works, the Lead and Zinc Complex.

The enforcer has taken up the measure after OTZK's main creditor – FIB won a court case against the factory and obtained a court order.

The Lead and Zinc Complex owner Valentin Zahariev has been chronically failing to surface his loan from FIB, which has led to the present developments.

Anonymous sources quoted by the BGNES information agencyat the time of the announcement of the tender said that the amount will cover only a fraction of the FIB credit.

They also explained that should the assets fail to be bought, the bank will acquire a right to them, but only insofar as it can revitalize the metal factory to get back its loan.

Zahariev's mismanagement of OTZK has caused a major business and social mishap in Bulgaria, after the owner failed for months to pay the factory workers' wages.

Many employees have chosen to terminate their contracts with the Complex, some filing lawsuits against it, amidst fears the developments in recent months are spelling the death throes of Bulgaria's once prosperous largest non-ferrous metal works.

The largest Bulgarian producer of non-ferrous metals, the Lead and Zinc Complex (LZC; OTZK) in the southern city of Kardzhali has been in trouble for quite a while, and the heavily indebted LZC will, most likely, have the fate of Kremikovtzi, the behemoth steel mill near Sofia, which no longer operates as a result of years of mismanagement.

In the spring and summer of 2012, there was an attempt to find an investor to save the factory with Polish consortium Silesia emerging as a candidate to rent the complex for three years.

On April 12 2012, after 40-day protests over delayed salaries, the workers at the Lead and Zinc Complex received some of their money, totaling BGN 500 000, which were distributed on as a result of the sale of another troubled company, the Gorubso-Madan mining firm.

Both the LZC and the Gorubso Madan Mines in the nearby town of Madan were part of Intertrust Holding owned by Zahariev. However, both have descended into debt, leading to workers' protests, and an intervention by the state arranging the sale of both companies by Intertrust Holding.