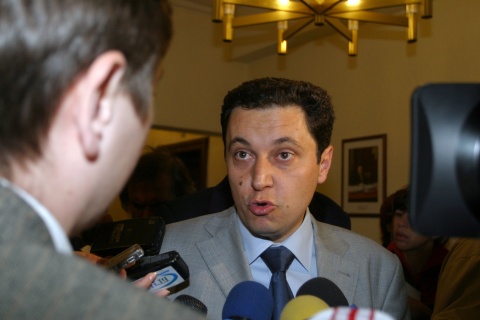 The leader of the conservative Order, Law and Justice party, RZS, Yane Yanev, labels the Belene NPP project "the biggest corruption scam since the fall of Communism." Photo by BGNES

There are one or two espionage investigations and cases in the project to build a second Nuclear Power Plant, NPP, in the Danube town of Belene in Bulgaria.

The claim was made by the leader of the marginal conservative Order, Law and Justice party, RZS, Yane Yanev, speaking Friday in an interview for Nova TV.

Yanev declined giving any further details on grounds this was classified information, but stressed the public is being kept in the dark about many aspects of the project.

"Everything is surrounded by secrecy and classified information. Belene is the biggest corruption scam since the fall of Communism 23 years ago, where millions of taxpayers' money have been wasted" the RZS leader said.

He stressed that for many activities at the NPP site there have not been any public tenders, leading to suddenly turning certain businesses very wealthy with the Mafia being the moving force behind it all, undermining the interests of the State.

Yanev, who during the presidential race in October 2011 threatened to "fire Prime Minister Boyko Borisov," emerged several months ago as one of his and the ruling Citizens for European Development of Bulgaria party, GERB, strongest allies. He demands the establishment of an Anti-corruption Committee to deal with such cases involving senior officials.

Belene reemerged during the week as headline news after Atomstroyexport increased to EUR 1 B its claim against Bulgaria's National Electric Company, NEK, over the country abandoning the project, triggering an avalanche of commentaries and the exchange of strong words between the two countries.