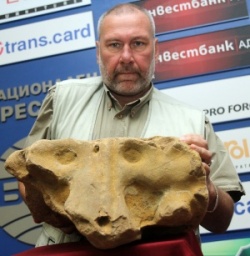 Bulgarian archaeologists have stumbled upon a unique lion head stone sculpture from the times of the Trojan War.

The discovery has been made in the so-called Womb Cave in the Eastern Rhodopes.

It was German ornithologists who initially discovered the sculpture, local media inform. They stumbled upon the artifact while studying the behavior of local birds and subsequently handed it over to Bulgarian experts.

The sculpture has been dated to the Late Bronze/Early Iron Age, or approximately 2nd/1st century BC.

The lion was an extremely important power symbol at that time, archaeologist Nikolay Ovcharov has pointed out, reminding its symbolic use in Homer's Iliad.

According to Ovcharov, the sculpture was used in a Thracian fertility rite.

At the beginning of each year, Thracian kings went in similar caves to commit animal sacrifices, he said.

The stone sculpture will be shown in the Regional Historical Museum in the town of Kardzhali.