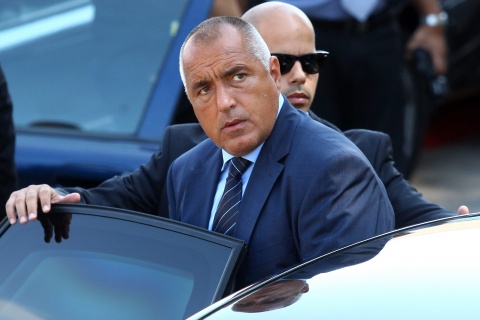 Bulgarian Prime Minister Boyko Borisov after the joint sitting of the Bulgarian and Israeli Cabinets in Jerusalem, Tuesday, Sept 11, 2012. Photo by BGNES

Bulgarian Prime Minister Boyko Borisov has compared the July 18 terrorist attack in Bulgaria's Burgas to the 9/11 terrorist attacks in New York City as well as the bombings in Madrid in 2004 and London in 2005.

Borisov spoke after the second joint sitting of the Cabinets of Bulgaria and Israel in Jerusalem on Tuesday.

"The second joint sitting of the governments of Bulgaria and Israel coincides with a crucial date – 9/11," the Bulgarian PM told reporters in Jerusalem, as cited by Focus news agency.

Borisov expressed condolences to the relatives of the victims of the terrorist attacks in New York, Madrid, London, Sarafovo, Kerbala (where the Bulgarian troops stationed in Iraq were attacked in 2003 resulting in 5 deaths), and the Bunovo train station (where ethnic Turkish extremists blew up a train in Southern Bulgaria in 1985 killing 3 children and 4 women).

The Bulgarian PM did remind that the terrorist bombing at the Bunovo train station is the largest railway bombing in Bulgarian history.

"It is very important to point out today that the stream of Israeli tourists coming to Bulgaria will continue, that we will keep on working together, and build up new projects," Borisov stated further in Israel.