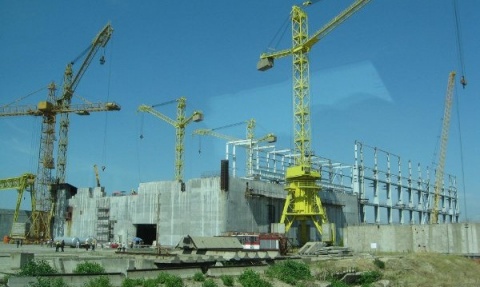 Russian Atomstroyexport has cautioned that Bulgaria faces huge penalties for the termination of the Belene NPP project. Photo by BGNES

The Russian state company Atomstroyexport increased to EUR 1 B its claim against Bulgaria's National Electric Company, NEK, over the country abandoning the "Belene" project.

The case of Bulgaria having to reimburse Atomstroyexport for scrapping plans to build a second Nuclear Power Plant, NPP, in the Danube town of Belene is tried by the International Court of Arbitration in Paris.

Rosatom, subsidiary of Atomstroyexport, the Russian contractor selected to build the Belene NPP, filed a lawsuit for EUR 58 M against Bulgaria's NEK at the International Court of Arbitration in Paris in the summer of 2011.

On Tuesday, Atomstroyexport, cited by the Russian news agency ITAR-TASS, announced that it is upping the claim over the early termination of the project by the Bulgarian government and the expired agreement from November 2006, while NEK continues to refuse to compensate the company for the inflicted losses.

After the construction of the 2000 MW plant by Atomexportstroy had been delayed with annexes 15 times, at the end of March 2012, the Cabinet of Prime Minister, Boyko Borisov and the ruling Citizens for European Development of Bulgaria party, GERB, formally abandoned the project, declaring it economically unfeasible.

In November 2010, shortly after a visit to Sofia by Russian PM Putin, NEK and Rosatom signed a memorandum providing for a final fixed price for the two reactors of EUR 6.298 B.

In mid-March 2011, apparently acting on concerns caused by the situation in Fukushima NPP, the European Commission confirmed that it wanted to reexamine the Belene NPP project - once Bulgaria finds an investor for it - even though it already approved it back in 2007.

Even before Bulgaria formally scrapped the Belene project, NEK and Rosatom had claims for one another, amounting to roughly EUR 60 M each over disputes for provided services and equipment deliveries and buy-back agreements that they have taken to international arbitration courts.