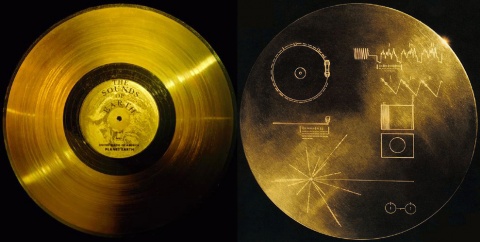 NASA's Voyager 1, launched 35 years ago with various messages from the Earth, is on the verge of moving into interstellar space.

Voyager 1 is about 11 billion miles (18 billion kilometers) from Earth and hurtling away at a rate of 13 kilometres a second, The Telegraph informs. Its sister craft, Voyager 2, is not far behind.

Both Voyagers are now on the very edge of a protective bubble that the sun throws around the solar system, known as the heliosphere.

Current data from Voyager 1 in the past week has shown that the solar wind has fallen by 90 per cent the level it has been for the past seven years while the level of cosmic rays has increased to its highest level, a clue that the craft is about to leave the bubble.

Scientists expect to see the final clue - the shift in magnetic field - any day now.

Both vessels carry copies of the "Voyager Golden Record," a sort of message in a bottle intended for potential alien civilizations. The record includes prominent Bulgarian folk song "Izlel e Delyo Haidutin," among others.

The song, famously performed by Valya Balkanska, can be heard HERE.

And the full track list can be seen HERE.