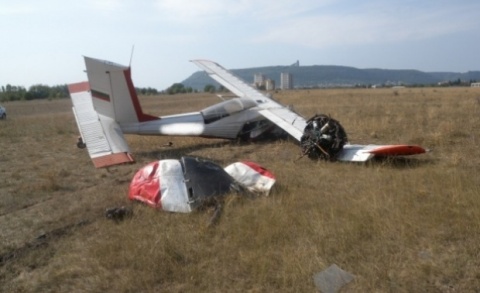 Photo of the crashed plane by the Shumen police office.

The condition of the 43-year-old pilot from Bulgaria's Black Sea city of Varna, who was injured in a crash landing of a small private plane Saturday, is stable, but critical.

The small Wilga PZL-104 plane crashed onto the runway of the Shumen airport in north-eastern Bulgaria Saturday morning after losing power some 10 meters above ground.

The 43-year-old pilot has suffered the hardest injuries, with fractures on the skull, collarbone and ankle, but his life is out of danger. He underwent hours-long surgery, which doctors say was successful, but note the patient is still in critical condition and on a respirator and will remain on it at least for the next 24 hours.

A 24-year-old female passenger has also been hospitalized in the local hospital, with fractures on the legs. Her life is out of danger.

The two other passengers travelling in the plane have made it through with no injuries.

Police inform they are probing the incident and will conduct a second search of the crash scene Sunday.

The Wilga PZL-104 is owned by the Air Zodiac company. This a second incident with a company craft for this year. In May, another plane broke its tale on power lines between two Shumen villages, the BGNES news agency reminds.

In this incident the pilot, who is also the father of the company's owner, miraculously managed to land the plane, but never reported it to the police.