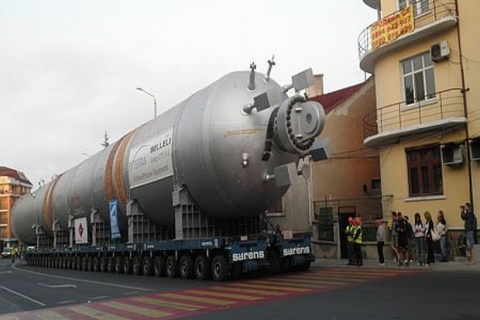 The transportation of a giant fuel reactor for the Lukoil Neftochim refinery is going on for a second day in Bulgaria's Black Sea city of Burgas, much to the joy of local residents and visitors.

The equipment, moving at just 1-5 km/h, is expected to reach its destination by the end of Saturday.

The 57-m long, 9-m tall reactor weighing 1,656 tonnes is to be implemented at a new facility under construction in Neftochim.

It is placed on a platform with 240 wheels and an elaborate balancing system.

The whole adventure is filmed by a Discovery Channel team for a feature in the Mega Structures series.

On September 15, a second similar reactor is expected to make its presence in Burgas.