??Dozens of Dead Dolphins Washed Ashore in Bulgaria in Summer 2012 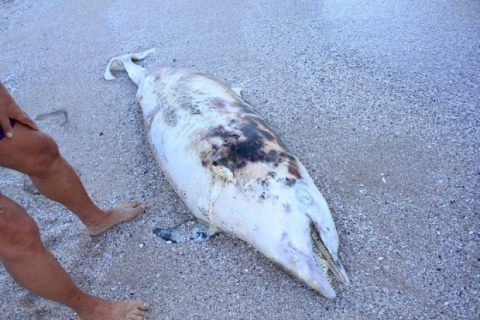 Dozens of dead dolphins have been found on Bulgaria's beaches in the summer of 2012. Photo by BGNES

Only in August 2012, more than 30 dolphins were washed ashore on the beaches between Byala and Tsarevo, the institution said, adding that the dead dolphins are from the three Black Sea species – common bottlenose dolphin, harbor porpoise, and common dolphin.

All three species are protected by law, and it is forbidden to hunt, kill, capture, or otherwise disturb them, or to take away their corpses.

A high number of migrating birds have also been hurt over the summer period, the Environmental Inspectorate in Burgas said.

In August, the environmental institution confiscated two iguanas and a monkey that were used as "tourist attractions" along the Southern Black Sea coast, including in the Sunny Beach resort.