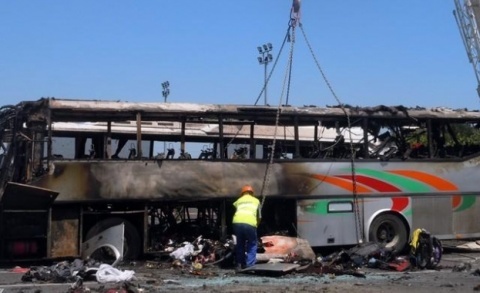 The explosion in Bulgaria was the deadliest attack on Israelis abroad since 2004. Photo by BGNES

Special agents of Israel's MOSSAD and the Bulgarian State Agency for National Security, DANS, are monitoring closely and providing security for synagogues and hotels with Israeli tourists in Bulgaria.

The information is reported Friday by the Bulgarian Standard daily, citing as reason the high number of Israeli citizens expected to travel abroad for Rosh Hashanah, the Jewish New Year, which is on September 17. This is also the official Day of Bulgaria's capital Sofia.

The Standard report comes on the heels of the July 18 terrorist attack in Bulgaria's Burgas, also known as the Burgas Bus Bombing, which killed 5 Israeli tourists and a Bulgarian bus driver at the Sarafovo Airport.

Israeli security services note that before the attack they did not have any early warnings about it and that they currently have no information on a new terror act planned in Bulgaria, but nevertheless insist to up security measures.

Bulgaria is not on the list of countries with travel advisories over Rosh Hashanah, but it is among those that have been asked by Israeli's National Security Council's Counterterrorism Bureau to increase security measures. Other such countries include Greece, Thailand, and Cyprus

The special agents are also keeping a close eye on airport traffic in the capital Sofia, and the Black Sea city of Burgas.

The concern stems not only from the Sarafovo attack, but also from the increased activity of Hezbollah and Iran.