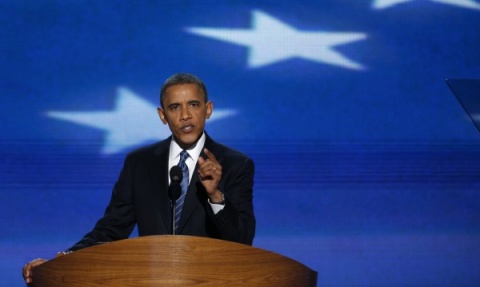 "I am no longer just a candidate. I am the president," Barack Obama told the delegates of the Democratic Convention and everyone watching his speech at home.

US President Barack Obama accepted Thursday evening the nomination of the Democratic Party in an official start of his reelection bid.

Speaking inside the Convention Center in Charlotte, North Carolina, he told voters they face a generational choice in November's election.

Organizers had hoped to have Obama taking the stage in a huge stadium in downtown Charlotte, but the venue had to be because of weather concerns.

Obama stressed that the nation's problems had built up over decades and there isn't a quick fix for them.

"I never said this journey would be easy, and I won't promise that now. But when you pick up that ballot to vote - you will face the clearest choice of any time in a generation. Over the next few years, big decisions will be made in Washington: on jobs and the economy; taxes and deficits; energy and education; war and peace - decisions that will have a huge impact on our lives and our children's lives for decades to come," he said.

The President also underlined the differences between Republican plans and his own policies, saying his opponents were "happy to talk about everything they think is wrong with America" without offering suggestions on how to make things right.

"That's because all they have to offer is the same prescription they've had for the last 30 years. Have a surplus? Try a tax cut. Deficit too high? Try another. Feel a cold coming on? Take two tax cuts, roll back some regulations, and call us in the morning!" Obama stated.

He also mentioned his energy strategy, saying the US had opened "millions of new acres for oil and gas exploration... and we'll open more".

"But unlike my opponent, I will not let oil companies write this country's energy plan, or endanger our coastlines, or collect another USD 4 B in corporate welfare from our taxpayers."

When addressing international issues, the incumbent President noted his success with eliminating Bin Laden and his withdrawal of troops from Iraq and planned drawdown from Afghanistan.

"But from all that we've seen and heard, they want to take us back to an era of blustering and blundering that cost America so dearly," he said.

"Only you have the power to move us forward. I recognize that times have changed since I first spoke to this convention. The times have changed - and so have I. I am no longer just a candidate. I am the president," is how Obama ended his speech, bringing the crowd to their feet.

In response, Romney's camp issued the following statement: "Tonight President Obama laid out the choice in this election, making the case for more of the same policies that haven't worked for the past four years. He offered more promises, but he hasn't kept the promises he made four years ago."

Earlier, Vice-President Biden accepted his own re-nomination. In a moving speech, focused on family and national security, Biden praised the incumbent president for his bravery in bailing out the auto industry and ordering the killing of Osama Bin Laden.

The third and final night of speeches in Charlotte also saw former Florida governor Charlie Crist - who was previously a Republican - and Massachusetts Senator John Kerry address the convention.

Former Arizona Representative Gabrielle Giffords, still recovering from a near-fatal shooting on a meeting with her constituents in 2011, appeared on stage to lead the convention in the pledge of allegiance.

Thursday's speeches brought an end to the Democratic convention, which will also be remembered by the emotional speeches from First Lady Michelle Obama and former President Bill Clinton.

A recent opinion poll shows Obama with a narrow lead over Romney.

However, an ABC News/Washington Post poll released as the convention got under way in Charlotte, North Carolina, showed Obama with the lowest pre-convention favorability for an incumbent president since the 1980s.