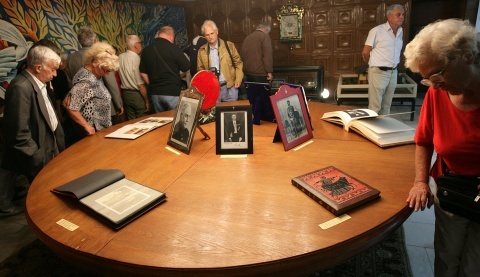 Visitors are pictured inside the Todor Zhivkov's museum in his native town of Pravets. Photo by BGNES

The Bulgarian town of Pravets, near the capital Sofia, birth place of Communist dictator, Todor Zhivkov, is marking Friday the latter's 101st anniversary.

The dictator's house and the adjacent museum will be opened for visitors free of charge from 11 am all the way through the evening.

The documentary film of director, Svetoslav Ovcharov, and screenwriter, Maya Zaharieva, "The Man and the People" will be presented at 4 pm. The film focuses on Zhivkov as leader of the country and the effect of his rule on Bulgaria. Ovcharov and Zaharieva will be in Pravets to answer questions and take part in the discussion after the showing.

The "Zhivkov" museum is under the authority of the National History Museum and it is maintained by the Pravets Town Hall. Regular admission is BGN 2 while guided tours cost BGN 5 per person.

The display boasts as a focal point gifts given to the Bulgarian Communist leader by foreign officials, including a camel saddle bestowed by murdered Libyan dictator, Muammar Gaddafi, Samurai weaponry, a scale-model of an ancient English fortress, of the Kremlin, of Taj Mahal, and metal figurines, representing an African procession, among others. The first items for the display came 10 years ago from the State Residence in Sofia's Boyana suburb and now amount to 239. There is also an exhibit of photographs showing significant moments from Zhivkov's life since high school until he became Head of State, including many pictures with other countries' leaders.

In 2011, in the occasion of the dictator's 100th anniversary, the house was renovated along with the entire street where it is located, with its sidewalks, and the nearby park. In addition, a monument of Zhivkov was erected in the yard.

Pravets is only 56 km east of Sofia and is accessible by a highway, built during the Zhivkov regime. Until today, the town is a display of the dictator's influence – well-maintained, with low crime rate and good business perspectives.

This is also the location of the sprawling hotel and golf club, owned by former Pravets Mayor (1968 – 1989), Vasil Zlatev, father of the Lukoil Bulgaria CEO, Valentin Zlatev.

The town owns the only preserved monuments of the dictator – found 10 years ago by his grand-daughter, Evgeniya Zhivkova, who searched for them all over the country. One is now on his grave and the other one was opened in the yard of his house on September 7 2011.

He became First Secretary of the Bulgarian Communist Party in 1954 and remained on this position for 35 years, until 1989, thus becoming the longest-serving leader of any Eastern Bloc nation. His rule marked a period of both economic stability and political repressions for Bulgaria, dominated by complete submission of Bulgaria to the Soviet rule, which lasted until the deterioration of East-West relations in the 1980s, when a stagnating economic situation, a worsening international image and growing careerism and corruption in the BCP weakened his positions. He resigned on November 10, 1989, under pressure by senior BCP members due to his refusal to recognize problems. Only two months later, in January 1990, the People's Republic of Bulgaria and its Communist regime ceased to exist.

Zhivkov remains one of the most controversial figures in Bulgarian history, triggering outrage and hate on one side and veneration and nostalgia on the other. The celebration of his anniversary in Bulgaria has always been marked by controversy and heated debates.