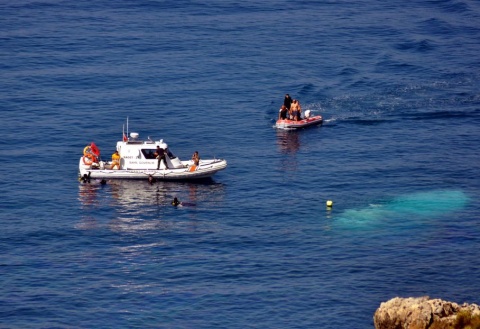 Some 60 illegal immigrants from Syria and Iraq have drowned off Turkey's west coast. Photo by EPA/BGNES

Some 58 people have drowned when a fishing boat carrying illegal immigrants sank after hitting rocks off the coast of western Turkey.

Nine children were among the dead, according to Turkey's Dogan News Agency, cited by international media. Several dozen survivors, mostly from Iraq and Syria, were able to swim through the Aegean waters to shore, only 50 meters away.

Survivors had told authorities that some people were trapped below the deck of the submerged vessel, and divers launched an operation to try to find them.

The group of migrants had previously made their way to hotels in the city of Izmir, where smugglers agreed to take them to Britain. Authorities arrested two Turkish suspects in the smuggling operation, Turkey's TRT television reported.

TRT earlier quoted Tahsin Kurtbeyoglu, a local administrator, as saying 20 bodies were recovered, but the toll rose through the day as more bodies were pulled from within the boat's confines. Those who survived were on the deck, rather than below with other members of their group. It was not immediately clear when the boat sank, but many such vessels carrying migrants make the journey at night to avoid detection by authorities.

Turkey is now hosting 80,000 Syrians who have fled the civil war in their country and are staying in camps just across the border, and some countries are concerned that larger numbers of Syrians could try to reach Europe illegally.

Greece said in July that it was quadrupling the number of guards at its border with Turkey and boosting other defenses in part because of worries about a potential influx.