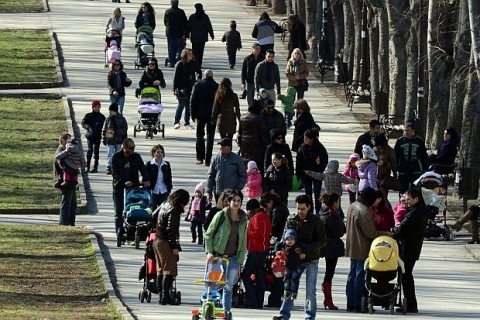 A recent survey shows that Bulgarians fear getting sick more than getting poor. File photo by Sofia Photo Agency

The majority of Bulgarians will spend time with their families (70%) or travel (68%) if they know that the end of the world is imminent.

The data comes from a survey of 4 903 people, ages 18-49, in 16 European countries, conducted by GFK Emer for National Geographic. 300 Bulgarians were included in the poll.

The calendar of the Maya schedules the end of the world for this year's December 21 winter solstice.

According to the poll, one of every five Bulgarians will try to have as much sex as possible, the same number will eat everything they want, while 3.5% would get drunk every day.

The survey further shows that Bulgarians fear getting sick more than the economic crisis – 41% and 33% respectively. The same trend is observed in Germany, Finland, Norway and Estonia, but on average 82% of Europeans are panicked mostly by the crisis.

The majority of the respondents in the 16 countries, including Bulgarians, agree that Germany, followed by Norway and the UK are the safest countries to flee to in case of an economic disaster. Greece, Bulgaria, Portugal, Poland and Turkey are at the bottom of that list.

One third of all Bulgarians see unemployment as the biggest threat for the country, 10% fear earthquakes, 11% fear crime, 5% fear the justice system, and 3% fear death.

Just 2% of Bulgarians would count on politicians in case of natural disaster or economic collapse. 77% would rather rely on their own strength, 10% would turn to the church, while one third will count on the army to save them.