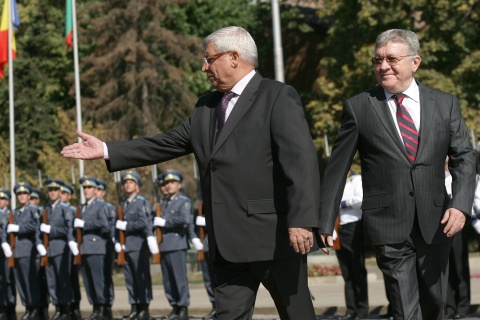 The Defense Ministers of Bulgaria and Romania, Gen. Anyu Angelov and Corneliu Dobritoiu, in Sofia Tuesday. Photo by BGNES

Bulgaria and Romania will be deepening their military cooperation "on all levels", their Defense Ministers, Gen. Anyu Angelov and Gen. Corneliu Dobritoiu, announced in Sofia Tuesday.

The Defense Ministries of the two Balkan nations are planning to expand their Defense Cooperation Plan by increasing the number of the international military exercises with the participation of forces of Bulgaria, Romania, the USA, and other countries, they said.

The future opportunities that Angelov and Dobritoiu discussed in Sofia included joint drills in counter-terrorism and military police activities, and joint logistics for military transport planes of the air forces of Bulgaria and Romania.

Both ministers emphasized the role of NATO and the EU for the deepening of their countries' bilateral cooperation in defense.

"The uniting of the efforts of Bulgaria and Romania for various joint projects would contribute not only to the development of their armed forces but also to the achieving of greater security and stability in our region, a greater impulse in regional cooperation formats, and, last but not least, a greater global security," Bulgarian Defense Minister Anyu Angelov stated, as cited by the Defense Ministry press service.

The Defense Ministers of Bulgaria and Romania, Gen. Anyu Angelov and Corneliu Dobritoiu, met in Sofia Tuesday for the signing of a Bulgarian-Romanian agreement under NATO's Air Policing program.

The document was inked by the commanders-in-chief of the air forces of Bulgaria and Romania, Maj. Gen. Kostantin Popov and Lt. Gen. Fanica Carnu.

Bulgaria, Romania, and the USA have boosted their military cooperation in the recent years under the so called Task Force East (formerly known as Joint Task Force East).