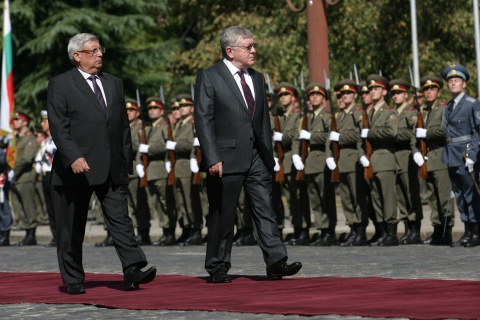 The Defense Ministers of Bulgaria and Romania, Gen. Anyu Angelov and Corneliu Dobritoiu, in Sofia Tuesday. Photo by BGNES

The Defense Ministers of Bulgaria and Romania, Gen. Anyu Angelov and Gen. Corneliu Dobritoiu, met in Sofia Tuesday for the singing of a Bulgarian-Romanian agreement under NATO's Air Policing program.

The document was inked by the commanders-in-chief of the air forces of Bulgaria and Romania, Maj. Gen. Kostantin Popov and Lt. Gen. Fanica Carnu.

The document defines the rules for transborder Air Policing operations of the on-duty aircraft of Bulgaria and Romania and each other's air space, and procedures for coordination and safety.

Bulgaria, Romania, and the USA have boosted their military cooperation in the recent years under the so called Task Force East (formerly known as Joint Task Force East).

The Air Policing agreement with Romania is Bulgaria's second, after it signed an Air Policing deal with Greece at the end of 2010.

Under the NATO Air Policing deal signed between Bulgaria and Romania in Athens, the designated aircraft of the two nations will be able to enter the air space of one another in case of a threat as stipulated by the respective procedures.

When required, fighter aircraft may be employed to assist in identification, or to assist/escort aircraft.

NATO members without the necessary national assets to conduct air policing are assisted by other NATO members to ensure that air sovereignty is maintained.