WB: Only 35% of Roma in Bulgaria, CEE Employed 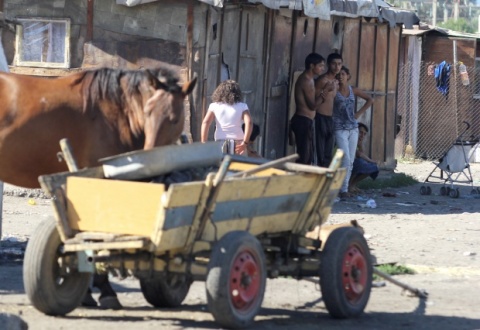 A view of the Roma ghetto in the Orlandovtsi quarter in Bulgaria's Sofia. Photo by BGNES

Only about one-third of the Roma in Central and Eastern Europe as a whole, Bulgaria included, have jobs, according to a report of the World Bank.

The WB report on the Roma in CEE was presented in Brussels on Tuesday, the Bulgarian news agency BTA reported.

It has found that about 35% of the Roma aged between 15 and 64 in Bulgaria, the Czech Republic, Hungary, and Serbia are employed.

Slovakia is the only country in CEE with somewhat better results in this respect, with 55% of the Slovakian Roma having jobs, the survey has found.

The World Bank report further points out that Roma are twice more likely to be unemployed than the other citizens of the surveyed countries in Central and Eastern Europe.

It says that in Bulgaria 81% of the Roma are threatened by unemployment, while in Roma the figure is 87%.

The World Bank has also concluded that the in Bulgaria, the Czech Republic, Hungary, and Slovakia, the Roma are twice as likely to be exposed to poverty as the majority of the citizens.

As a solution, the World Bank report offers expansion of the micro-crediting schemes for Roma since most of the working Roma describe themselves as "self-employed".