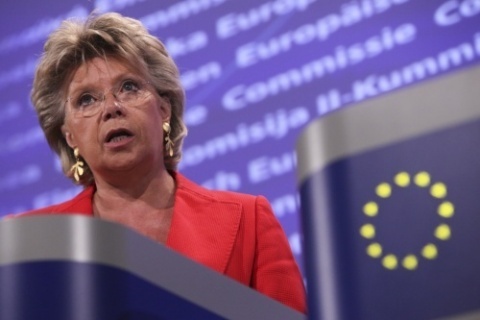 European Justice Commissioner, Viviane Reding, is on a visit to Paris on Monday and Tuesday to discuss issues such as the Eurozone crisis and treatment of Roma. Photo by BGNES

The European Union might postpone Romania's Schengen entry indefinitely, according to a statement of European Justice Commissioner Viviane Reding.

Reding, who is on a visit to Paris on Monday and Tuesday to discuss issues such as the Eurozone crisis and treatment of Roma, has spoken in an interview for the French newspaper Le Monde.

"It would not be a surprise, if the Schengen countries decide to not integrate Romania immediately," said the Commissioner.

Reding explains that after the political crisis in Romania, the EU was carefully following the situation in Bucharest. She stresses that the return of Traian Basescu to the presidential post happened thanks to pressure from the EU and the US.

"We keep it (the situation in Romania) under close monitoring after the terrible political fight in July and August. We were able to demand that a kind of parliamentary putsch be stopped. We were able to avoid the biggest evil thanks to the determined response of numerous actors including the European Commission, the European Parliament, European states, but also the IMF. The most serious deviations could be limited thanks to the Cooperation and Verification Mechanism that we created. We hope all political actors in Bucharest will be able to overcome differences in order to prepare the election campaign in October. Young democracies in the East need to achieve in a short period of time what old democracies had done in several decades," states the EC Vice President.

The interview triggered a strong reaction in Romania with its Ministry of Foreign Affairs "noting with surprise the words the Vice President of the European Commission, Viviane Reding, on Romania's entry to the Schengen Agreement."

In a statement the Ministry says that such approaches create the premises for a discriminatory treatment.

Romanian media interpret the Commissioner's interview as a sign that the EU might separate Bulgaria and Romania in their Schengen joining. They point out that the day before Reding's statements on Romania's Schengen entry, the President of the European Commission, Jose Manuel Barroso, has said during a visit to Sofia that Bulgaria fulfilled the necessary criteria for acceding to the Schengen Area and the issue of the Schengen entry should be decided upon in Bulgaria's favor.