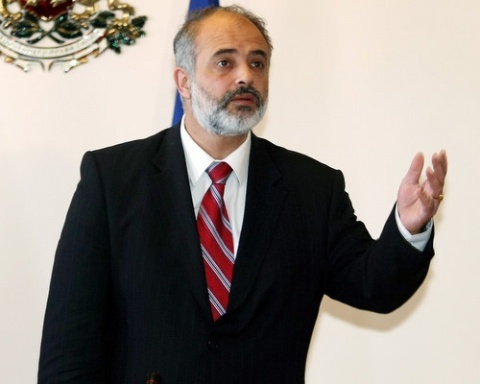 Social Policy and Labor Minister, Totyu Mladenov, confirmed plans of the cabinet to increase of the income of all Bulgarians next year. Photo by BGNES

The minimum monthly wage in Bulgaria will be increased to BGN 310 (EUR 158) in 2013, according to Social Policy and Labor Minister, Totyu Mladenov.

Speaking Monday for the Bulgarian National Radio, BNR, Mladenov explained that in 2011 the cabinet of his ruling Citizens for European Development of Bulgaria party GERB upped the minimum monthly wage by BGN 30, followed by another increase of BGN 20 in May 2012, while this wage will reach BGN 310 with the planned BGN 20 increase in 2013.

The Minister confirmed his earlier announcement that the 2013 increase of retirement pensions in Bulgaria is still being discussed, but it would not be less than 7.6%.

Mladenov stated the increase will involve all pensions, including the highest ones such as those in the amount of BGN 700 a month.

He stressed that GERB had implemented serious reforms in the retirement system that allow now better accomplishment of the revenue plan of the National Social Security Institute, NOI, and the increase of pensions.

The Minister further reminded that the cap on pensions will be eliminated beginning January 1 2014, a move that is expected to stimulate people to pay social security contributions based on their real income.

Regarding Christmas bonuses, Mladenov said it would become clear in November if there is money for them. He also informed that State servants, military people and policemen would not have to pay their social security contributions from their own pocket.

In mid-August, Deputy Prime Minister and Finance Minister Simeon Djankov boasted that the time to increase income has arrived in Bulgaria.