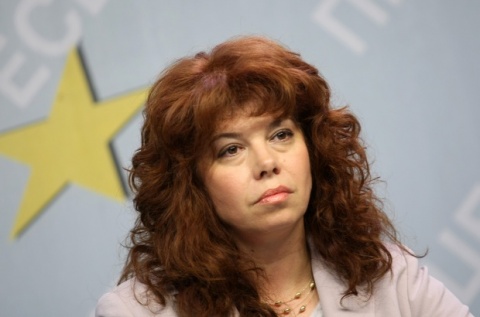 BSP MEP, Iliyana Yotova, is adamant the Bulgarian Agriculture Ministry has abused EU funds and must be referred to OLAF. Photo by BGNES

The Members of the European Parliament from the opposition left-wing Bulgarian Socialist Party, BSP, will inform the EU anti-fraud office OLAF about the abuse of EU funds by the Agriculture Ministry.

The report comes on the heels of revelations that the Ministry has spent BGN 50 000 from European Funds in one year for 234 shares on Facebook and 140 on Twitter.

The announcement was made Sunday by BSP MEP, Iliyana Yotova, speaking for the Bulgarian National Radio, BNR.

The Bulgarian Sega (Now) daily conducted an investigative report in the Ministry's public tender for advertising the EU Program for Rural Development on social networks for the amount of BGN 47 000.

The winning bidder is the K M Kom, a company of two very young former PR female employees of the Bulgarian Food Safety Agency, Kristina Spasova and Lora Dimitrova. The company was registered on September 26 2011, the day Spasova left the Agency, which is less than 3 months before the launch of the tender as the law requires.

Yotova is adamant this is abuse of EU funds that must be referred to OLAF and an example of the unclear spending of these funds by the ruling Citizens for European Development of Bulgaria party, GERB.

She further blasted the entire GERB policy in the EP regarding funds for the next program period, with the stated priorities being "chaotic and obsolete."

"Until now, the Bulgarian government has not directed the country's MEPs towards a position they must maintain. It is both ridiculous and sad to watch how all others have the clear position of their governments and fight at meetings for every penny while with us everyone is pushing for party interests. It is, for example, anti-social to not ask money for healthcare. They either lack experts, or administration, or this is simply the extent of their capacity," the MEP concluded.