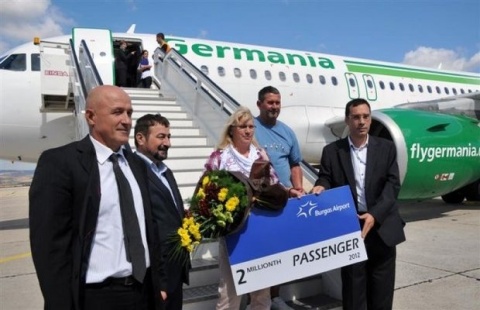 Bulgaria's Burgas Airport on the Black Sea welcomed its 2-millionth passenger for 2012 Saturday.

The lucky passenger also got a pass to the VIP room of the airport, which she will be able to use upon her return.

The other passengers on the plane received flasks with Bulgarian rose aroma.

Egeler, a neurosurgeon from Magdeburg, was then transported via limo to Sunny Beach, where she will stay for her holiday in Bulgaria.

Burgas Airport recalled that its 2-millionth passenger in 2011 arrived 16 days later and estimates a 6% growth of passenger traffic upon the end of the summer season.