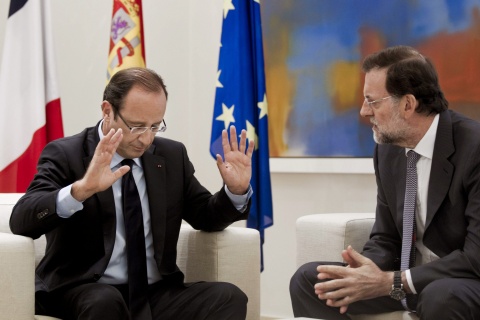 "The ECB's mandate include price stability and monetary policy. When you see such wide gaps in yields, that could be a justification for an intervention in the name of monetary policy," Hollande told a news conference after meeting with Spanish Prime Minister Mariano Rajoy in Madrid, as cited by international media.

European Central Bank President Mario Draghi is expected to flesh out his plans next week for a bond-buying program he announced in August, conditioned on countries first applying for aid to the euro zone's rescue fund.

On Wednesday he wrote in an opinion piece in a German magazine that the ECB must employ "exceptional measures" at times.

Rajoy, of the center-right People's Party, reiterated after his meeting with Hollande, a Socialist, that he is waiting to hear more about the program before deciding whether his country will apply for European aid.

A rescue from Europe would likely combine ECB buying of Spanish bonds on the secondary market with the European rescue fund, or EFSF/ESM, buying Spain's debt issues at primary auctions.

The aid would likely come with additional conditions beyond what has already been imposed on Spain in return for up to EUR 100 B in European aid for Spanish banks that is in the pipeline.

After the meeting Mariano Rajoy told reporters that he agreed with the French President that EU Member States should step up efforts to tighten fiscal integration in the area and introduce growth-boosting measures. He also expressed his conviction that Greece would be able to meet the bailout conditions and assured that Spain would reach the tough deficit target.

"We want the European Union to go forward, neither the euro, nor the single market, nor the union will give a step backwards," Rajoy said.

It is up to Spain to decide whether it wants to request further aid, said Hollande.

Both leaders expressed their backing for Greece as it struggles to implement tough measures that were conditions for its sovereign bailout, the first one in the euro zone.

European leaders should show support for Greece at an October 19 EU summit if the crisis-hit country's conservative government shows commitment to move ahead with economic reforms, Hollande said.

Rajoy, who has raised income tax and value-added tax in Spain this year, said he would try not to raise taxes in next year's budget, although he said difficult decisions were sometimes necessary.

Rajoy has announced EUR 65 B in budget cuts to try to bring the public deficit down to 3% of gross domestic product by 2014. But with the economy in recession, tax take dropping and the jobless rate stubbornly high at close to 25%, more painful austerity may still be in the works for Spain.