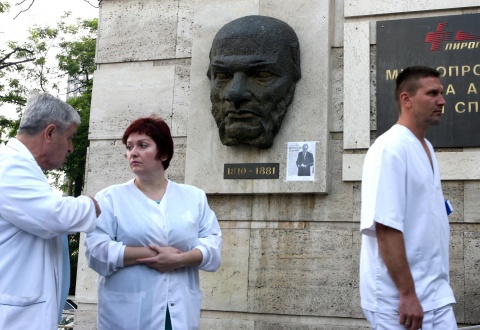 A young man is fighting for his life at the Sofia emergency Pirogov hospital after the car he was travelling in fell from a bridge. File photo

A young man is listed in critical condition after a car fell on railroad tracks in southern Bulgaria.

Trains serving the line between the capital Sofia and Kulata on the Greek border were stopped overnight due to the incident, which happened after 10:30 pm Wednesday near the town of Simitli.

A Volvo car with four young men travelled on the bridge above the railroad before making a sharp turn and falling on the tracks from 5-meter height.

The most seriously injured individual has been taken to the Sofia emergency Pirogov hospital with numerous fractures and a brain injury. The others are listed in the hospital in the southwestern city of Blagoevgrad.

The cause of the incident remains unknown.

The trains were halted until the vehicle was removed from the tracks.