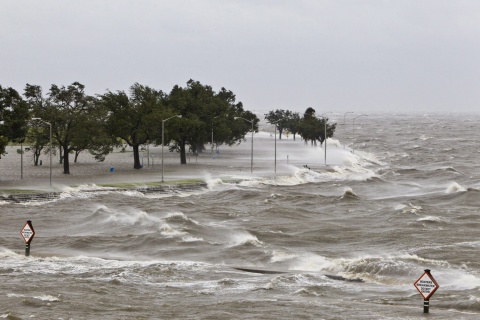 Hurricane Isaac continued to pound Louisiana with heavy rains and damaging winds Wednesday as forecasters said the biggest threat is storm surge flooding from central Louisiana to the Panhandle of Florida.

New Orleans is hunkering down as Hurricane Isaac pummels the city with strong winds and drenching rain, the BBC reported.

The hurricane is drenching the Louisiana city exactly seven years after the devastating Hurricane Katrina, but is much less powerful.

The city has closed its new floodgates in a bid to protect it from the effects of high waters brought by sustained winds of up to 80mph (130km/h),

Isaac was still maintaining Category 1 hurricane strength, but just barely, with sustained winds of 75 mph, the National Hurricane Center reported. It was located directly over Houma, La., which is about 45 miles southwest of New Orleans.

The storm was crawling to the northwest at just 6 mph. It is expected to weaken to a tropical storm later Wednesday.

Widespread flooding was reported in New Orleans and other coastal cities.

One of the worst hit areas was Plaquemines Parish, about 50 miles southeast of New Orleans, where water spilled over a levee. One of the highest storm surge levels recorded so far was the 12-foot surge there late Tuesday that also flooded homes in the area.