French Police Crack Down on New Roma Camp near Paris 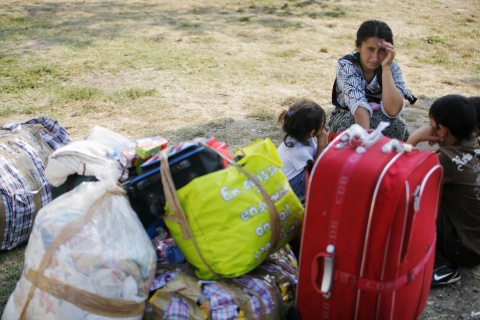 The French police have expelled around 500 Roma from a camp in the Paris suburbs Wednesday before bulldozers moved in to raze their makeshift homes.

The operation, carried out on public health grounds on the basis of a court order, takes to around 750 the number of Roma made homeless in different parts of France this week as a result of their camps being dismantled, Expatica reported.

France's Socialist government has defied critics of its treatment of Roma migrants from Bulgaria and Romania by accelerating the clearance of camps without making any alternative provision for their inhabitants.

There are an estimated 15 000 Roma living in temporary camps in and around French cities.

Despite the reservations of several of his colleagues, France's Interior Minister Manuel Valls has pursued a policy of dismantling the settlements and offering free flights and financial incentives for the Roma to return to their countries of origin.

The policy has been severely criticised by human rights groups and is regarded as futile by many since repatriated Roma can easily return to France under European Union freedom of movement rules.

France argues that primary responsibility for the Roma should lie with their countries of origin.