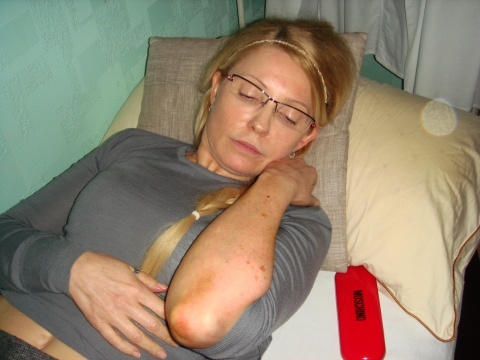 An undated file picture made available on 27 April 2012 shows Yulia Tymoshenko showing her bruises, from alleged beatings by prison guards, in Kachanivska prison in Kharkiv, Ukraine. Photo by EPA/BGNES

Ukraine's high court has rejected the appeal by jailed former Prime Minister Yulia Tymoshenko against her conviction for abuse of office.

Tymoshenko, the opposition heroine of Ukraine's 2004 pro-democracy "Orange Revolution," was jailed for seven years in October 2011 for abusing her power by pushing through a gas deal with Russia in 2009 when she was prime minster.

She is currently treated for acute back pain in a state-run hospital.

Tymoshenko's trial has been condemned by Russia and Western governments as politically motivated.

The European Court of Human Rights (EHCR) has begun considering her case.

However, observers expect the ECHR to delay its decision until after the election, to avoid being accused of political influence, Deutsche Welle has noted.