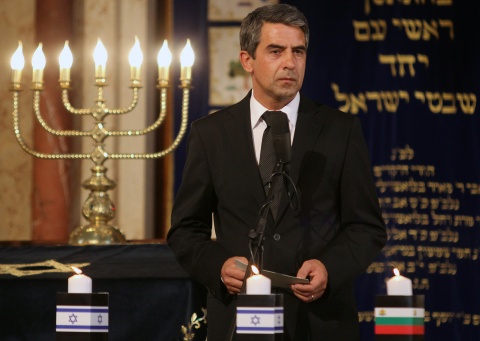 Bulgarian President Rosen Plevneliev speaking at the memorial for the Burgas Bus Bombing victims at the Sofia Synagogue. Photo by BGNES

The people and governments of Bulgaria and Israel have honored the memory of the five Israelis and one Bulgarian who perished in the terrorist attack at the Burgas Airport on July 18, 2012.

The remembrance was held Tuesday in the Sofia Synagogue in the presence of the relatives of the five Israeli tourists and Mustafa Kisyov, the Bulgarian bus driver, who died in the attack, and was also attended by Bulgarian President Rosen Plevneliev, and Israel's Deputy PM Moshe Ya'alon.

"When we held the first mourning service at Sofia Synagogue for the victims of Burgas Bus Bombing, a young girl came over with her mother, and left a red rose on the door of the Synagogue. Nobody noticed this girl but she came to offer her condolences as did many other people from the Bulgarian, Muslim, and Armenian community," stated Robert Jerasi, Chair the Central Jewish Religious Council in Bulgaria, as cited by BGNES.

"The Bulgarian and Israeli people together with the entire democratic community condemn this gruesome attack showing the cruel face of terrorism. The murder of innocent civilians cannot be justified by any cause. The fight against terrorism is a common cause of the democratic world," Bulgarian President Plevneliev stated in his speech in the synagogue.

He added that Bulgaria and Israel are strategic partners who have been caused to come closer together because of the pain from the Burgas terrorist attack.

"We have made a firm commitment to find those responsible, and to hold them accountable," Plevneliev added.

"I express my deepest condolences. The peoples of Bulgaria and Israel and the entire democratic world will not allow terror and fear to divert us from our main goal – tolerance, peace, and prosperity for our nations, and the entire humanity," were the words that Plevneliev wrote in the book for condolences in the Sofia Synagogue.

"Israel and Bulgaria will not be at peace and will not shut up until all those responsible for the terrorist attack in Burgas are not punished... We will pursue them with all of our firmness, without hesitation and wondering, as we have done in the past," Israeli Deputy PM Moshe Ya'alon stated.

"I had one hope – to never witness a memorial for victims of a terrorist attack in Bulgaria. My hope failed. This has only strengthened my convinction that we must be united against those who wish to rule over us by the power of fear," declared Maxim Benvenisti, chairman of the Organization of Jews in Bulgaria "Shalom".