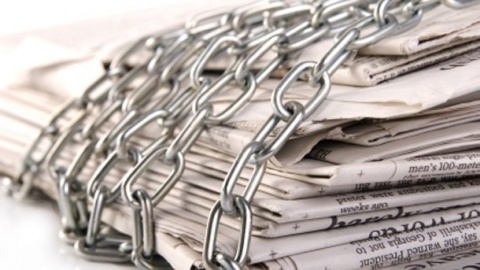 Freedom of media in Bulgaria has been a serious source of concern with a raining near full monopoly on the media market. File photo

According to the site for investigative journalism Bivol.bg, citing their own, undisclosed, but trustworthy sources, Borisov told Pavlov that he had a choice between selling the newspapers and going to prison.

Bivol notes that Pavlov and his partner Ognyan Donev are BGN 5 M short in funds to maintain the normal publishing of the papers and even though the amount is relatively modest, no Bulgarian investor is showing interest over fears they could enrage the PM.

Another investigative journalism site, afera.bg, backs the above, writing that Pavlov had succumbed to the pressure and had signed a preliminary agreement with banker Tseko Minev,  behind whom stand Corporate Commercial Bank, CCB, and New Bulgarian Media Group.

"New Bulgarian Media Group," which is widely considered pro-government, belongs to media mogul and former Head of the State Lottery, Toto, Irena Krasteva, and her son, Member of the Parliament from the ethnic Turkish party Movement for Rights and Freedoms, DPS, Delyan Peevski. The group has a near monopoly on the Bulgarian media market, making purchase after purchase, with Bivol.bg stressing that with the acquisition of 24 Chassa and Trud, only 2-3 publications will remain outside the group, giving as example Sega (Now) daily and Capital weekly.

According to the investigative report, the goal is for Borisov and the government of his ruling Citizens for European Development of Bulgaria party, GERB, to have full monopoly on the press, a precedent since the times of the Communist regime, and to use it to manipulate the 2013 general elections.

Bivol further writes that the PM has already talked in person with editors from 24 Chassa and Trud on changes in their editorial policies after the papers become Krasteva's and Peevski's property. The article points out that the latest move reveals the consistency of Borisov's attitude towards the media as described in a secret diplomatic cable from 2006, prepared by then US Ambassador in Sofia, John Beyrle, and released by the whistle-blowing site WikiLeaks:

"Borisov built a PR machine that won him broad support from all age and social groups. Journalists tell us privately that Borisov pays cash for positive coverage and threatens
those who report negatively on him."

The Tuesday investigative article notes how the latest "sinister" developments will become the backdrop of the upcoming visit of the European Commission Vice President Neelie Kroes to Bulgaria.

Olivier Basille, Acting Director at Reporters without Borders, also spoke at the meeting, strongly criticizing the concentration of media ownership in Bulgaria.

In an interview for the German Die Welt, he gave in the aftermath, he said the following:

"Private corporate interests stand behind many Bulgarian newspapers. Businesses with murky owners and interests hide behind them. Some of them are also used as offshore companies for money laundering. We can add to this the fully-twisted advertising market in Bulgaria where State institutions advertise in publications loyal to them."

Bassile further noted that only a handful of bloggers are fully independent in Bulgaria.

Pavlov was also among the participants in the Brussels meeting where he made a "toothless" statement, Bivol reminds, adding he, however, used to the max his presence to portray himself as repressed for being a freedom of speech supporter.

From some recordings, leaked in the daily Pressa (Press), it emerged that he has been aware of the pending criminal charges against him long before the said meeting.

However, the preliminary agenda of her visit to Bulgaria at the end of September includes only meetings with the "biggest players" such as politicians, institutions, and publisher unions, but not with journalists who have been pressured, terrorized and issued death threats by pro-government groups, Bivol writes, citing its own, unnamed sources in Brussels.

The agenda, being coordinated with the Bulgarian government, fully excludes any independent journalists, bloggers and NGO representatives, who are the people that can depict an objective picture of the real state of freedom of speech in Bulgaria, the article concludes.