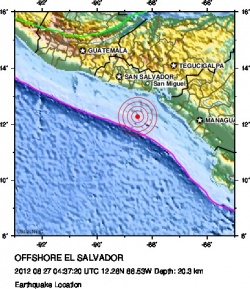 The quake struck late on Sunday local time, some 111 km (68 miles) offshore, according to the US Geological Survey.

Initial reports said it caused no major damage or casualties.

The Pacific Tsunami Warning Center initially said that the earthquake had spawned a potentially destructive tsunami. However, later reports said the tsunami was much smaller than initially projected, international media inform.