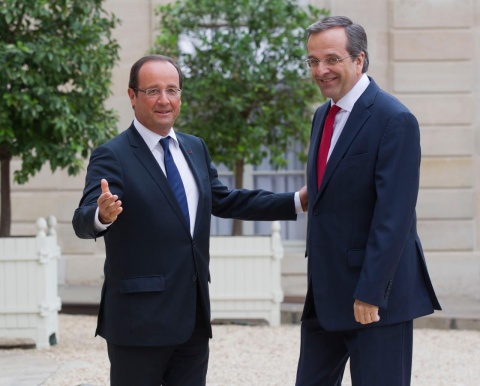 At the same time, Hollande has urged them to do more to show their commitment to reforms to keep their country in the euro zone.

"For me, the question should no longer be asked: Greece is in the eurozone," Hollande said after meeting Greek Prime Minister Antonis Samaras in Paris, as cited by international media.

Not unlike German Chancellor Angela Merkel a day earlier, Hollande offered Greece no immediate relief from its current regime of painful austerity measures.

The Greek premier has been on a swing through European capitals as part of his country's push to win more time to carry out wrenching cuts to avert fiscal crisis.

On Friday, Merkel met with Samaras in Berlin and said she expects Greece to meet its previous commitments, while stressing Germany wants to keep it in the euro.

Hollande also said that any decision on delays for Greece must wait for a report next month by the "troika" of Greece's debt inspectors — the EU's executive Commission, the European Central Bank, and the International Monetary Fund.

"[Greece] must demonstrate the credibility of its program and the willingness of its leaders to go all out all the while making sure that it is tolerable for the population," Hollande stated.

He said Europe needs to make decisions about Greece "the sooner the better" - notably after the report is presented to a European Union summit in October.

"In the face of ordeals, we must show more solidarity. ... I hailed the efforts that the Greek people have committed to painfully for the last two years," Hollande said. "We need to be aware of all that has been done."

Samaras, for his part, noted continued pressure within the financial markets amid concerns that Athens might not hold to its reform plans — and risk dropping out of the common currency.

"I also think we can fulfill our commitments and goals, reduce our deficits, reduce our debt, achieve the structural reforms that have begun — privatizations — and justice," he added.

Following the leaders' comments to reporters, a Hollande adviser said the two men had also discussed the increasing flow of Syrian refugees into Greece and Cyprus as they fled fighting linked to the bloody rebellion against President Bashar Assad's regime.