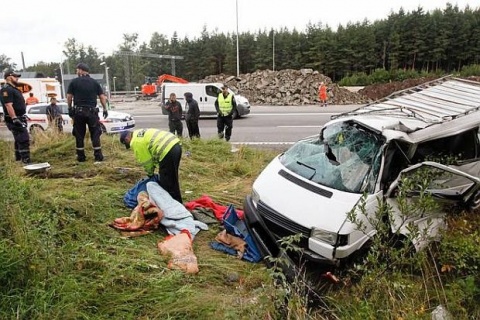 A serious crash with a van with a Bulgarian registration plate in Norway has left seven people injured.

According to reports of the Aftenposten newspaper, as cited by Bulgarian TV station bTV, the crash happened a little after 5 am on Friday.

A VW Transporter hit a concrete road railing and overturned off the side of the road near the town of Moss.

The van had eight people on board, seven of whom were injured in the crash, all of them Bulgarians

Two or three of the injured were in critical condition, according to Afterposten's website.

One of the injured was taken to the Ullevaal Hospital by helicopter and one was taken by ambulance to the hospital in Fredrikstad.

The concrete blocks had been placed on the road to mark construction works near a toll booth.

The police was notified about the collision at around 5.20 am.

Traffic on the E6 road was temporarily stopped but one lane was opened at around 6.30 a.m.