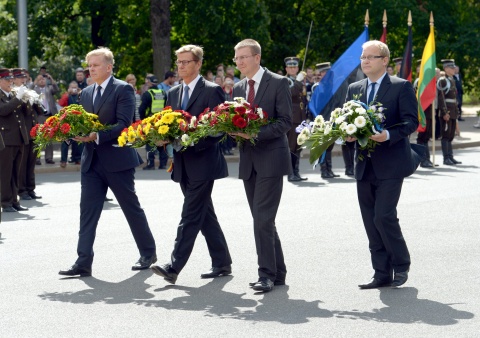 The foreign ministers of Germany and the three Baltic states warned Thursday that the debt crisis risks splitting Europe between north and south in an echo of the east-west division of the Cold War, as pressure mounted on Greece.

"Two decades after the fall of the Berlin Wall, a new split threatens to divide our continent, this time between north and south," the foreign ministers of Germany, Estonia, Latvia, and Lithuania said in joint statement released in Vilnius, Lithuania.

"Europe was divided for close to 50 years between west and east and it is pointless to divide it today between the north and south. We do not want a new Berlin Wall," Stubb told Swedish daily Dagens Nyheter, as cited by international media.

Greece's call for more time to implement budget cuts and tax hikes required to continue receiving bailout support has set the stage for another bruising European debate and speculation that the country could be forced out of the euro.

Amid worries that contagion could trip up Spain and Italy, a number of economists have suggested splitting the eurozone into two - a stronger northern euro and a weaker one that would help southern countries adjust their economies.

But the German and Baltic ministers warned that the problem had spread beyond the economic arena.

"This cooperation in Europe is not something we can take for granted, as the debt crisis reminds us. It has become a profound crisis of credibility and trust," they wrote.

But with voters in many countries tired of making aid commitments, some politicians say the onus is on the eurozone states to prove to investors which buy its debt that they can correct their finances.

German Chancellor Angela Merkel and French President Francois Hollande were to meet in Berlin on Thursday, with Greece at the top of their agenda.