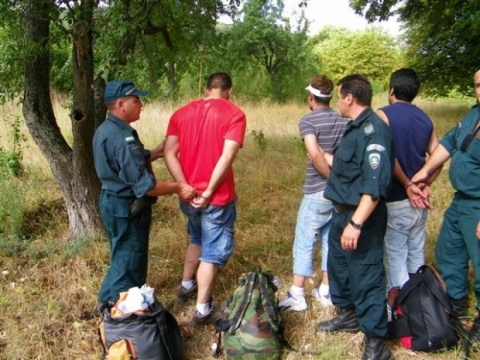 Bulgarian border police arrested a group of 10 Syrian men and a Turkish human trafficker on Wednesday. Photo by Interior Ministry

The Bulgarian Border Police have arrested 14 illegal immigrants from Syria in two separate incidents near the border with Turkey, the Interior Ministry announced Thursday.

In a border police operation, 11 men were detained near the southeastern town of Elhovo Wednesday night, the police said.

Ten of those are illegal immigrants from Syria, trying to make it to Western Europe, while one, the human trafficker that brought them into Bulgaria, is a Turkish citizen.

The Turkish man is charged with human trafficking, while the Syrians face charges for illegal border crossing.

Meanwhile, aslo on Wednesday, the border guards caught a Syrian family with their two children near the village of Kraynovo, Bolyarovo Municipality, after they had crossed into Bulgaria from Turkey.

In a separate case, the Bulgarian border policemen detained a family of Dutch citizens born in the Iraqi city of Suleimaniye who took away they four children without permission from a foster home even though they had been dispossessed of parental rights.

The family was detained while leaving Bulgaria at the Kapitan Andreevo crossing on the border with Turkey, and the four children, aged between 3 and 15, are temporarily being taken care of by the Bulgarian social authorities.