Samaras Guarantees Greece Will Pay Back EUR 100 B to Germany 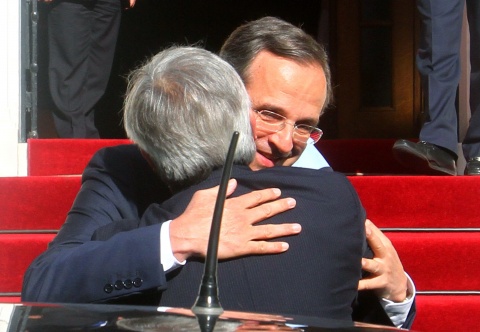 Greek Prime Minister Antonis Samaras said on Thursday he will "personally guarantee" that Greece will repay Germany the bailout funds worth over EUR 100 B it has lent Athens.

Samaras made the pledge in an interview with the Sueddeutsche Zeitung newspaper, ahead of a visit to Berlin on Friday where he is expected to ask German Chancellor Angela Merkel to extend the deadline for debt repayment.

"The Germans will get their money back. I guarantee that personally," he said, as cited by RIA Novosti.

In a separate interview with the German daily Bild, Samaras said Greece would spectacularly bounce back from recession and repay the bailout money to all the others.

Under the terms of the bailout agreement signed with the troika of international lenders, Greece must convince its creditors it can cut EUR 11.5 B from the state budget within the next two years to be able to receive the much-needed loans from the second package of the EUR 130 B aid.

Even in this case, however, the bailout funds will not suffice for Greece to meet all of its obligations. The Greek premier will reportedly ask Merkel to extend the austerity deadline for two years to 2016.

Some media have previously reported with reference to German government sources that Germany, which has spoken out against the provision of a third rescue package to Greece, may agree to ease the Greek austerity measures and extend the deadline to 2015.